“Hmm…I wonder how many cups of coffee I can drink in one month.”

It was early December (known in my household as the season of my birthday), and my son and I were in the Starbucks line at Target. He saw a starburst sign promoting a $40 to-go mug that gives you free coffee refills for the month of January. “Mom! You have to get that mug!”

My son knows me well. I love a good deal almost as much as I love coffee. To his 10-year-old heart, this mug was the ultimate birthday present. Even though I wasn’t convinced it was actually a good deal, I couldn’t say no to my sweet son. To be kind to him (*cough), I decided to start 2018 by happily drowning in coffee. 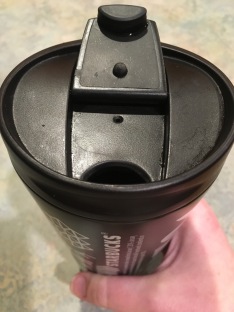 The answer to my question of how many cups of grande-sized coffees I can drink in one month is….[drumroll please] 52.

Writers have blogged amazing life lessons they discovered through journeys such as limiting their clothes to 7 pieces or switching out prescriptions for essential oils, but I thought I could share the completely inconsequential lessons I discovered through 52 cups of coffee.

Caffeinated coffee as your only beverage for the day is unwise. Un-wise. Very unwise. Don’t do it as tempting as it sounds.

The Starbucks closest to my house in the Price Cutter closed. Tears are as bitter as Starbucks dark roast when your coffee plan is ruined.

I really began hitting my groove at this point. I rocked 3 coffees a day in this stretch.

Starbucks actually gives you a huge amount of hassle for decaffeinated coffee. That’s right, Starbucks baristas don’t bat an eye with orders like, “sub soy, extra shot, no whip, add two and three quarters packets of Splenda.” But get yourself ready for the eye-roll of the century when you order…decaf coffee. At the most iconic coffee company in America. “I don’t have any brewed, so I’ll have to do a pour-over.”

Yes, Starbucks, people do drink decaf coffee in the evening. And no, Starbucks, we don’t want to pay the extra dollar for the Americano instead of having you do a pour-over. I’m editing my letter to Starbucks after I’ve calmed down a bit. Maybe I should have switched to decaf a little sooner.

They don’t hassle you for ordering four large cups of water to go with your free-but-not-free cup of coffee. But decaf coffee? ”Oh step back, girlfriend. I’d have to do a pour-over.”

A somewhat frustrating need to go to Kansas City for the day became a silver lining when my daughter and I turned it into a girls‘ trip and a chance to do five cups in ONE day.

My kids having the flu really impedes my ability to get out to Starbucks, but my home coffee (not included in my count) is still good … and smells way better than Lysol fumes.

Life isn’t always about lessons–which is sometimes hard to remember as a mom. I often have my To-Do List and Responsibilities Every Successful Adult Learned by Age 10, 9, and 4 and Places Deadly Germs Hide in Your House scrolling through my mind like a teleprompter.

I need to push pause and waste time in the Starbucks drive-thru line as my kids and I add up how many cups of coffee I’ve had in the past 25 days. The $40 mug was worth every penny to hear my 9-year-old daughter throw up her hands and say, “Mom, you’ve already had 39 coffees, so basically with every one you have from now on, you’re just making money!”

That’s what she said, friends, so put it in the books. January will officially be my most caffeinated, easiest-money made, and most eye-rolled month in 2018.